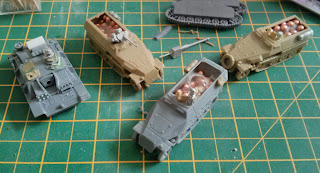 Readers will be aware I have embarked upon the creation of a 15mm "Kowel 1944" themed army for the Bolt Action rules system.  This is due mainly to space constraints as I have a lot of 28mm figures lurking about.  That said, the relatively low cost is also very appealing to a cheapskate such as myself.

Anyway, I had been working on a rediscovered StuG III G and things were going well.  However I had niggling doubts concerning the cast cupola armour.  This started production in late '43 but try as I might I could find no photos or film of thus protected vehicles in spring '44.  It bothered me... 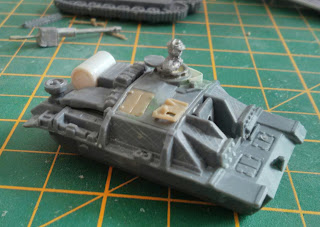 Salvation came in the form of Battlefront's plastic StuGs, one of which is being reverse engineered to late '43 spec.  More of this process in the future.

I had a rare burst of enthusiasm yesterday and got the required SPW assembled.  These are from the PSC kits and are rather nice.  Although I think some reinforcement of the front wheels will be needed as they appear fragile. 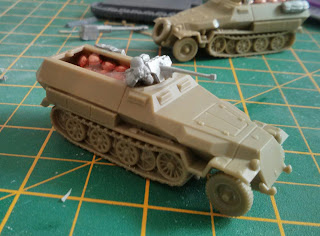 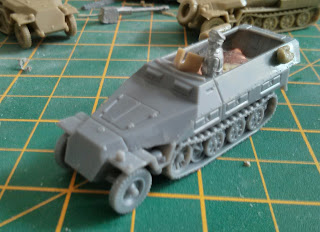 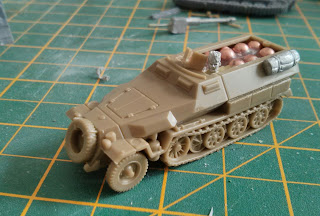 The next stage is to add foul-weather canopies to the 251s, sculpt some limbs and sort out detail on the StuG.  With a bit of luck the holiday weekend will allow this.

As can be seen in the photo below, I have found a LeIG and some mortars that, when added to the Infanterie, will bring me up to the desired 1000pts.  I am determined to complete this project, although the pull of the Renaissance is getting stronger. 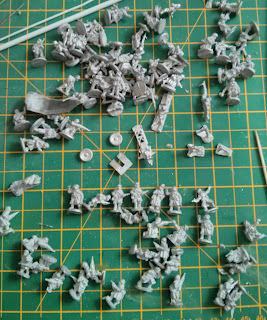 Another evening spent on this creature.

Added stowage comprising: oil drum, cast box, jerry can and two pieces of wine cork covered with a "greenstuff/Milliput" tarp.  The drum was drilled and pinned into the chassis to act as an anchor for the other bits. 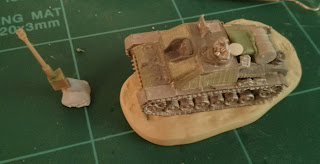 I didn't like the over thick hatch cover, so made one from a disc of styrene sheet.  MG guard was reshaped and trimmed. 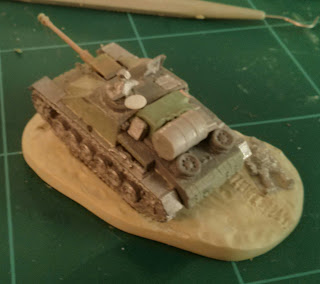 Spare track links and gun/mantlet had been taken from a PSC sprue.  The end of the barrel drilled and joins filled with liquid Squadron putty. 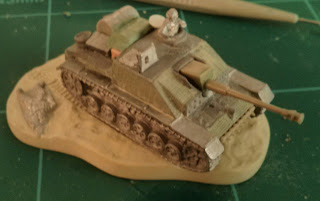 Various details to be added tonight. Plus the figure sculpting...  I may well fabricate some schürzen from plastic sheet.

I am fairly happy considering the mediocre nature of the Battlefront model.  Apologies for poor photos, a dingy room coupled with a Nexus phone camera doesn't equal good pictures!
Posted by Ritter von Krautheim at 00:46 No comments:

Presently, I am on holiday in North Wales.  As it rains a good deal and I have three children to mind at night - I took along some modelling supplies as a diversion.

The current project is Bolt Action 15mm and I decided on a 1:100 StuG.  Having found some (long forgotten) Battlefront resins when I moved last week, I chose one of these as the Beastie to work on.

Only after a long hiatus and viewed next to PSCs plastic versions, have I realised just how horrible the model is.  Hardly a straight line and so many inaccuracies - ho hum. 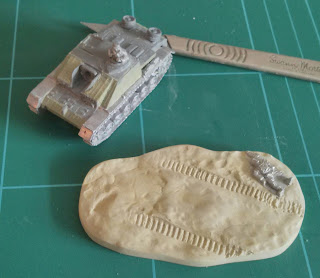 I have made a scenic base from Milliput surrounding a steel "repair plate".  The plate is in there to make the thing usable with magnetic storage - an obsession of mine.  Added to the base is a dead Ivan (Peter Pig?), a goodly amount of texture and (intentionally messy) tank tracks.  The sides have been sanded to make the construct more "base-like"!

I am trying to decide on the mantlet.  The topfblende may be too late for this spring '44 baby but it is my preferred option at the moment.  Time will tell. 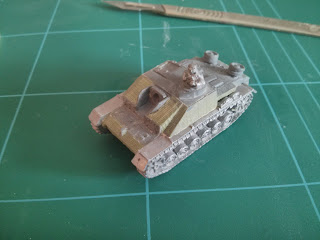 Commander is going to be in a privately "acquired" hooded jacket.  The base figure is an old beret wearing bod I found - he may be from Skytrex.

More to do tonight, now off to a castle or three. :-)
Posted by Ritter von Krautheim at 01:59 No comments: 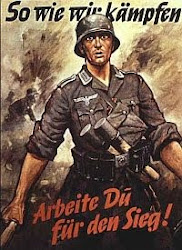